Facebook is keen to integrate features from other social media networks within its platform. Recently, it officially launched audio rooms and podcast tools similar to the Clubhouse app. It is also beta-testing the Bulletin newsletter, which is like Twitter’s Revue. Today, Facebook experiments on Twitter-like threads. 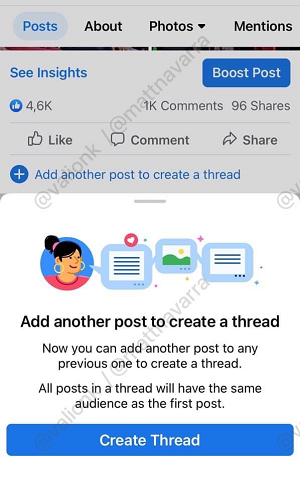 In a tweet shared by Matt Navarra, a social media expert, a selected group of Facebook users are now seeing prompts during the posting process. The new prompt informs users that they can add another post that will be linked with the previous post. This creates a thread that will have the same audience as the first post. Every post added in a thread will be connected to the first post. As such, a longer stream aligns with the original announcement. This is very much like a Twitter thread allowing users to build a narrative flow via connected tweets. The thread post will be highlighted by a “View Post Thread” button. It is being tested under a small group of public figures on Facebook.

The Twitter-like threads of Facebook can open up new opportunities for marketers to engage within the community. They can be useful to highlight comments on live shopping events or update existing posts more engagingly.